Well we had a much quieter night weather wise than the previous night in Marree. The boys had a much better sleep and nothing needed fixing up. However, it was still overcast, cold and the wind had started to pick up again and during our evening by the fire we had decided that unless we saw a significant shift in the weather in the morning we would make a push home sooner rather than later. It's no fun camping in the cold just cause you can.

Although it was tempting to do a few of the phenomenal 4wd tracks of the area, with the weather like it is, it wasn't going to be fun for everyone.

So an early packup was on the cards, in fact it was the earliest packup of the whole trip breaking our previous record by a whole 5 minutes. We were on the road before 8am! 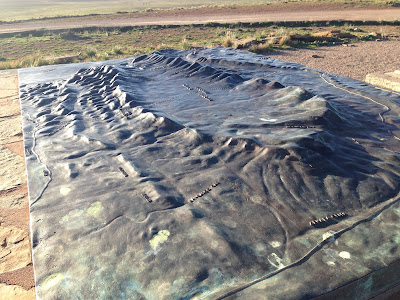 A model of Wilpena Pound found on top of Stokes Hill 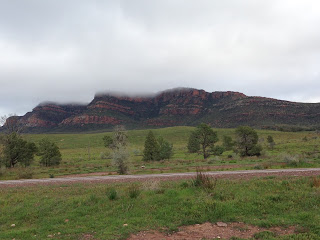 Viewpioint from the northside of Wilpena Pound 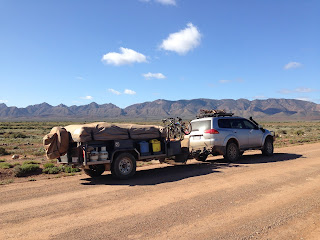 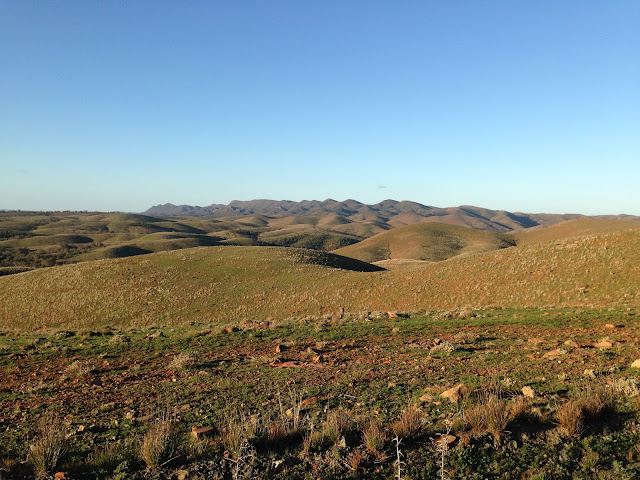 It is definitely a place that we would like to come back and explore at the later stage. Not sure when given that it is 1500km or so from Canberra. But it's on the bucket list.

We weren't too sure where we would aim for on this day but we figured that whilst the roads were good and traffic quiet, we would make hay while the sun shines.  The boys were just great given the long days ahead, the promise of getting home was a strong push. They were missing their Lego and teddies (they only brought two along on the trip!).

As you come off the plateau we went through some amazing rolling green hills. Reminded dad of the Windows 7 standard background, sorry for the nerd references.  Yes that green!

There were a number of towns that we went through and pending on the weather we would stop for a Joey picture or other sights that grabbed our eyes such as the big gum tree, at Orroroo, estimated at over 500 years old! 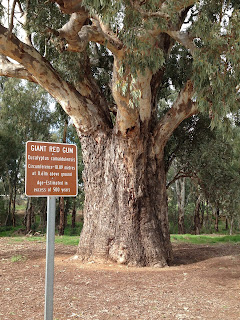 And the changes were just as dramatic going from green hills to salt bush and back again. It looked like we were going to be able to make Mildura by day's end so we pushed through a pretty long day driving wise. A total of 600 odd kms. We settled in Mildura Big 4 by about 6:30, remembering to change our time forward 30 minutes!

By going through Mildura it also meant that we had ticked off 4 states and 2 territories on this trip, even if it was only very briefly in Victoria. That said we didn't get any pictures of the state boarder crossings!

The boys loved the facilities of the park, especially the Nintendo in the play room.  We used the camp kitchen for meals due to inclement weather, as well it availability, which was directly next door to said game room so it worked it pretty well.

Our last day on the road was the trip from Mildura back to Canberra. The weather had cleared somewhat, allowing the removal of some of the layers by the time we had packed up and back on the road.

The last time we had been in this region was the trip to Mungo NP and it was interesting to see how then place has developed in such a short time. Still the seemingly endless fruit trees but frontage volume of truck traffic through the area it was a thriving community.

We made our way across the Hay plains and did our usually stop in the middle to take in the view. It was so lush with grass growing in the spoon drains on both sides of the road and standing water in lots of places. It was clearly a very wet winter. Glad we missed it!

We got back into Canberra around 7pm which was an awesome time, covering over 800km, our longest day of the trip.  A total of 1535 in two days.

The boys were amazing in the car, and very excited to get back to "happy house". Belle and Oscar were just as excited to see us, if not a little shocked to see that we hadn't left them!  Oscar was pretty clingy for the rest of the evening and the few days following.

We did the minimum unpack that evening, preferring to just chill and get the boys into bed after a little play time (fat chance of getting them out of the Lego room in under an hour).

As we had arrived home a day earlier than expected we started the long unpack and cleanup of the car, camper and all it contents over the following weekend. And it took that long!

With final blog posts being written and journals completed it was a nice chilled out weekend, giving ourselves enough time to get back into the swing of things and ready for the onslaught of normality on Monday!