Moving day today, the first of many so we can keep moving south.  Our plan was to stay at Crystal   Creek which was the only creek that you cross on your way to Verilya Point.   We didn't have enough time to see the point itself due to the road condition it takes about 1 1/2 hours for the 29 km!
After a stop over in Seisa for some food, fuel and grease supplies for Ernie (nothing serious just to squeeze a bit more on for the trip home) we headed south.  The road was a little more cut up when compared to our trip up, a few more corrugations certainly for those going north. 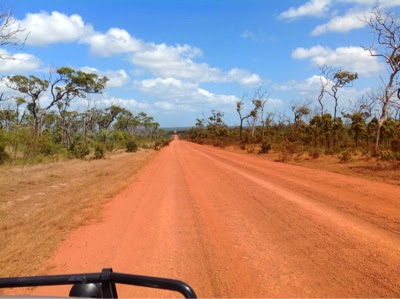 First stop for the day was at 12:03.  We know the time because it was at this time we learnt that the Jardine Ferry (or more precisely the ferry driver) takes an hour for lunch from 12:00 to 1:00.  So we waited, with quite a few cars and even a semi waiting on either side. 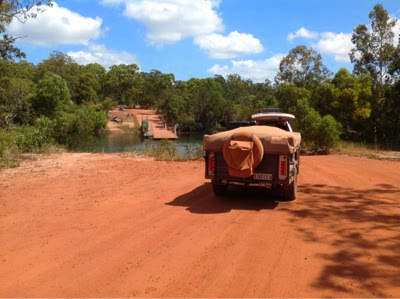 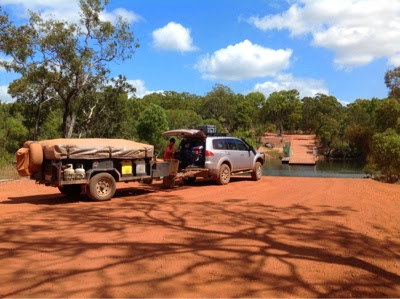 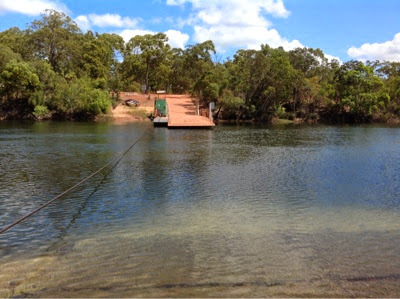 Only 30kms south of the ferry was our planned camp for the night.  To say that we were less than impressed is an understatement.  The creek itself was fine, access wasn't great when compared with the other creeks we've stayed at.  It was the state of the camp sites, litter was everywhere, and it just didn't appeal to stay even for a single night.  The options were to continue on to Bramwell or back on the track to stay at Bertie Creek. After a late lunch  and a swim for the boys, we opted to try for Bramwell station, about 160 odd kilometres down the development road.
It was clear from this section of the road that it's condition had gone south since we were going up,  it was fairly hard going on the passengers and car with lots of corrugations.  Having said that going north would have been worse, we didn't get a picture but the inside line of the corners were barely able, the outside almost undriveable.  The corrugations would have been 5- 10 cms high and go for 500 metres in the good sections.  Even going south there were times you were just a passenger and pointed the car roughly in the direction you wanted to go as you skimmed over the corrugations.
It was a long day for all,the boys were really good given the length of the day, 7 hours all up, about 5 of those in the car.  We got to Bramwell station about 5:15.
It would of have been a world record setup of Ernie, everyone working like a well oiled pit team.  He was setup with 15 minutes.  I think it was the lure of happy hour (the ringing of a large cow bell) that had just commenced at the bar across the road that spurred on our pace.
Bramwell station is the tourist side of Australia's northern most cattle station.  A 1340 square kilometre property.  For our $30 we got clean facilities and they put on live entertainment every night of the tourist season.  It was a great stop over, with a good atmosphere.  A 40 series landcruiser club was staying there as well and they were a good lively bunch.  We sat round the bar area listening to the music and banter till around 9:30.  There was a quick interlude back to the tent for a yummy Spag Bol and then back for more songs. 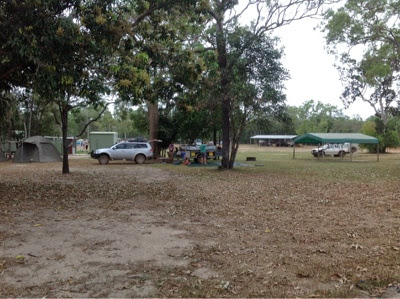 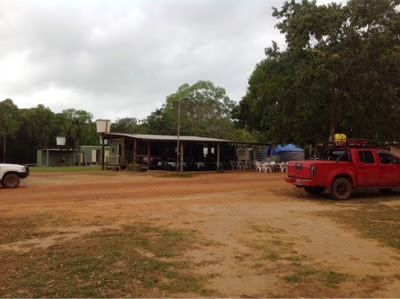 The camp area was quite well kitted up with bucking bull ride and a pet Brolga called Bitty who prefers males, and has issues with small children and females.  Dad got a dance from her in the morning! 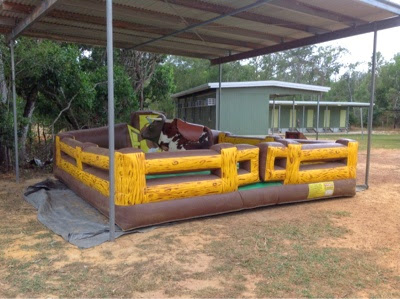 A bucking bull: Andi wasn't keen for a go! 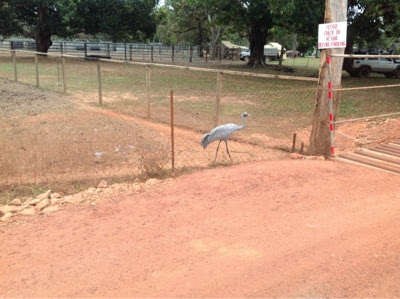 They also had a few calves to pet and peer at. 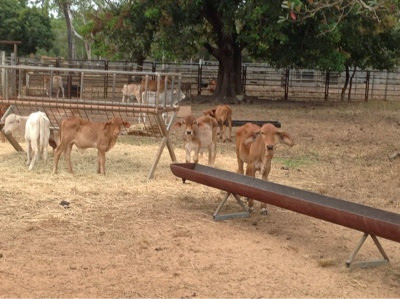