Well the days are running out, its our second last pack up for the trip.  The morning is fairly brisk and so it takes a bit to coax the family out of the camper, 3.9 degrees they say!  The weather is acclimatising us to the forthcoming Canberra winter mornings.  We didn't get any pictures of the campsite at this location but it wasn't anything to write home about.  The electrical wire on the top of the colourbond fence says it all.  Bourke sounds like its quite a rough place, its the only place we have been to where the drive through grog shop is behind a cage!

Pack up goes well and Mum and Dad have a quick shower.  As we are about to go we wonder what the boys have got up to? They were on the park just a minute ago.  We find them chatting away to a older couple that were in the midst of taking their tray topper off the back of the ute!

From the conversation we had it sounds like the boys had a lovely chat whilst finding out how everything works.  The couple were actually lucky to get back to Bourke; they were on their way north to Hungerford and thought they should check the car over after a rough bit of road.  They were met with flames coming from the right hand rear wheel!  A quick extinguish to put out the flames but they were in real strife with a shattered bearing and axle shaft that had come loose from the Diff!  Lucky for them there was a telephone box just 500 metres down the road. In the end they were towed back and were getting the mechanic to come out to the caravan park to fix it up.  About $1000 or $1500 they reckon ... amazing how quickly it can happen ... cross fingers!

We leave at 9:35 and make our way south to Nyngan.  If you look at the map the road seems pretty straight.  They are not wrong!  Boredom sets in at the 10 km mark.  On goes an audiobook by Andy Griffiths to pass the time, they are entertaining but after the first 4 times they can be a little mind numbing!

We stop for lunch in a town called Trangie.  The usual wraps with a concoction of ingredients was consumed.  The boys played in the skate park, pretending to be on skateboards, it was quiet with everyone else in school.  Mum was trying to read drafts of the blog so had her head in the ipad whilst Dad and the kids rang around like chooks.

Back on the road we are making our way up some altitude finally as we head towards Dubbo.  Yes the road has corners and hills!  Makes for much more interesting driving.  The "Just Crazy" audio book we had for about 2 hours or so, was coming to an end and the boys were getting a bit etchy whilst going through Dubbo.  Understandable, we have done three days of 4 or more hours in the car.

Our target today is a reserve just north of Wellington.  We were planning a big day all the way home originally but we felt if we could, it would be best to break it up.  The reserve was called Ponto Falls, on the Macquarie river.  With a bit of dirt  to get in through cattle farms, we came across a lovely spot.  Sought of reminded us of our camp at Palmer river, just a little further from the water.

We setup camp and Mum started preparing the boys favourite dinner, Spag Boll as their final camp dinner.  It was predicted to get to 2 degrees overnight and the temps dropped in line with that as the sun went down.  The fire was lit and we tried to gather as much little bits of timber from around the joint to keep it going.  We had a few "stayer" logs from previous camps that saved our bacon.  As the sun set we noticed that the farmer had moved some cattle into the reserve.  It made for some interesting comments from Andi when the "moos" happened.  They weren't shy either, coming close enough for Bruce the shovel to encourage them to keep their distance. 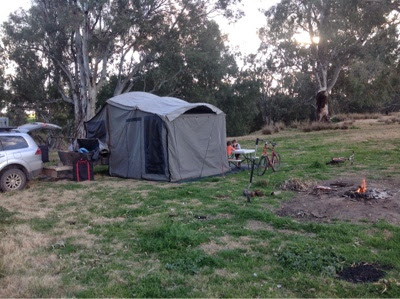 Camp at Ponto Falls
Boys in bed by 7:30 or earlier, sorry can't recall.  Mum and Dad weren't to far behind them.
Posted by Stuart Ross at 14:24