Day 56 - Winton to Ilfracombe (via Longreach)

The packup went well and once again we were all on the road just after 9am ...we were hitting our straps.  Reckon we have this packup thing licked by the last night!
Before making our way to Longreach we visited the Age of Dinosuars centre which was about 39kms out of Winton on the Longreach road.  It was situated on top of a jump up, a raised round rocky hill which gives you the most amazing view given the flatness of everything else around.  We opted for the tour that commences hourly, we scraped into the 10am tour which was lucky.  We were introduced to Matilda and Banjo, the most completed and one of the first dinosaurs they discovered here.  The work they doing is amazing, discovering dinosaurs that have never been seen before anywhere in the world!  In the first 30 minutes they lay out where they found them and then go through a process of reconstructing them in 3D, the boys, all three of them were mesmerised. Matilda was a sauropod (long neck and tail) Banjo a smaller carniverious guy, more like a raptor.  Matilda was discovered after a farmer phoned David Elliot up and asked them to come check out some bones, it was Matilda's thigh bone they found.  On further digging, Banjo lay next to her.  2 for the price of one.
Then it was over to the laboratory, about a 500 metre walk across the top of the jump up.  Lovely views as you go.

The tour started at 11:30 so the boys had some waiting time.  Played with puzzles in the waiting room, a container in a big shed with images of the area been shown to music. 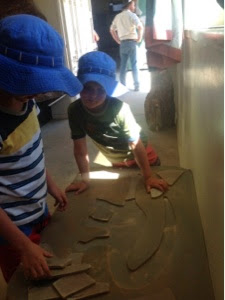 Once the second part of the tour started with Steve informing us how the place came to be.  It only started in 1990 when David Elliot, a farmer keen on dinosaurs discovered bones in one of his paddocks.  Up till then only individual bones had been discovered, out here they were discovering whole skeletons, and it sounds like it sent the dinosaur fans in Australia into a bit of a tizz.  The museum was established because they found so much and wanted to store it but other museums and places didn't have the storage and David was concerned that it would be going overseas and lost for ever.  So he and many others lobbied for it to remain in Australia and the Winton district.  Steve described the process of creating a museum, not something a farmer or anyone else does everyday!  The first was to find some land, a jump up was desired simply for the view.  A family whose name I don't recall offered up a small paddock for gratis, a small 4000 acre paddock, so the location and space issue was ticked! Next they lobbied for grants from government and in 2012, they were successful and the main entrance building was completed. 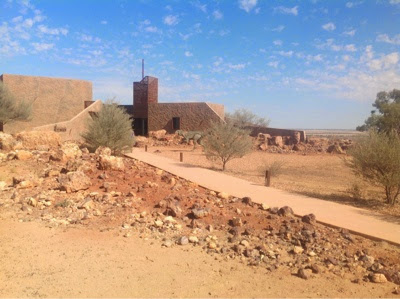 The lab buildings were next and a great 30m by 20m shed was constructed with lodgings.  This is where the painstaking work of removing rock from bones occurs.  They also store the bones they have discovered and await processing.  They are all wrapped in plaster cast to preserve them. They only dig 3 - 4 weeks a year, they have found enough to keep the processing going for 10 years!
They ran through the process of how the bones came to be, what they do to recover them and then process and restore and reconstruct.  Lots of pictures of this so will include them at a later stage.
The museum community engagement is simply the best model I have seen.  Anyone above age 18 can come along on digs.  Anyone above the age of 12 can work in the laboratory.  No training or prior knowledge necessary.  So they have people from all over Australia coming and working for them and paying for the privilege.  It's about $2000 a week to do diggings, that is all inclusive of accommodation food, transport and "refreshments".  It's about $60 a day to work in the lab for the first 10 days then free from then on.  They have also run work experience program's for the Winton area, support community events and causes. They have become a big part of the community and the support from the community is evident as well.
The information on display, the relaxed nature of the tours were fantastic, clear and concise with really passionate tour guides to boot!  Steve, our guide, is one of four full timers at the museum.  We were comparing this to our excuse for a national dinosaur museum in Canberra and it just doesn't!  What a difference a farmers view makes as apposed to a scientist has on the world sometimes!

View for the jump up.  Imagine the sunsets!
It was great morning at the museum.  Moved onto Longreach aiming to get there for a late lunch. Another 176kms of dead straight road punctuated by small twists and turns to keep you awake.  Saw some emus but there wasn't much else around. 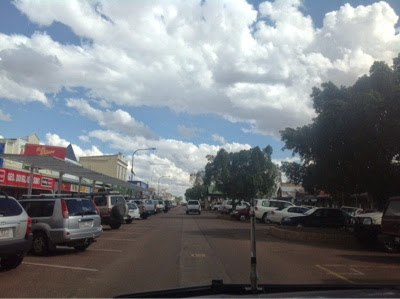 Longreach was a stop for some lunch and restock.  The reviews of the caravans parks wasn't great and down the road in Ilfracombe sounded like a good place as any.  Given good reviews, the happy hour is famous, so off we went.
On arrival you can see why, the staff greet you with friendly open arms, gave us an option of several sites.  After setup we made our way to the swimming pool, it opens from 3:30 to 6:30 each day.  There is a larger pool and smaller spa that is water from the artesian basin.  The water is drawn up from a bore out of town but it is too cold to swim in, not sure what the temp is, but the spa is heated to around 36 degrees.  We spent a bit of time in the bigger pool to refresh but quickly returned to the spa. It is big enough to hold 20 or so people!  Good way to chill down and relax!
Around 5:30 we made our way to the happy hour shed, a tin shed in the middle of the park, with tables and chairs and curios from farming days long past.  There was a good turn out with the place full.  We felt like the youngest people there, clearly a grey nomad haven! 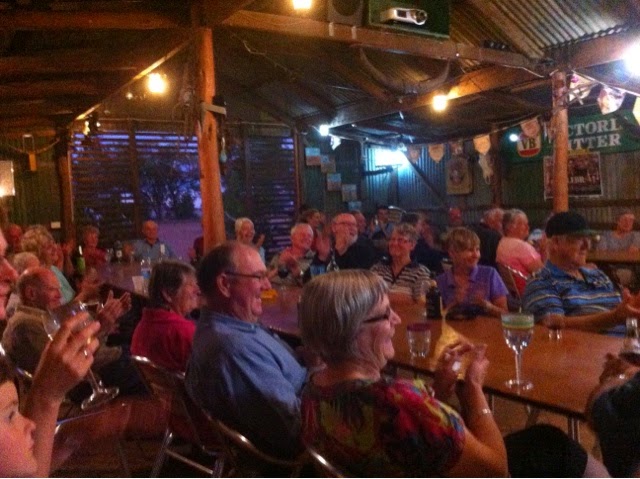 The Happy hour shed
After a mingle and a stand by the fire the entertainment for the evening began.  Jesse and Karen the park owners do bush poems, jokes and stories that have you in stitches for an hour or more.  Thank goodness most of the jokes went over the kids heads, although we will see how many awkward a questions we get!
Back to camp for dinner and chill out. 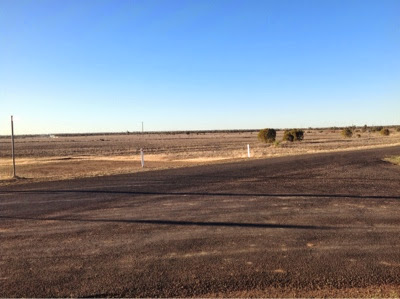