The day started like any moving day, Mum and Dad packing things up while the kids munching breakfast and continuing their games from yesterday.  At least the weather was clear after a couple hours of rain overnight.  It meant a few puddles to clear in the morning but nothing serious.
Before we left we spotted the lesser spotted camping tree, it comes out only a few times and seems to coincide with a visit by a famous Ross family.  The blooms are stunning, usually musty coloured. 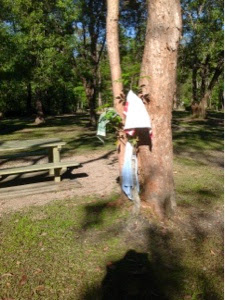 With the road out being a little clearer than when we arrived, the views of the coastline when we could sneak them through the thick forest were amazing. 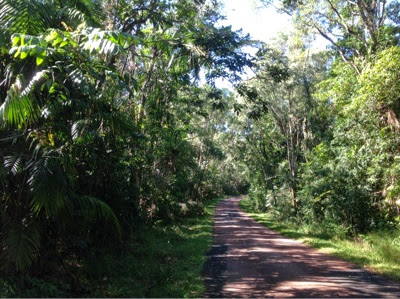 Lush sun-drenched rainforest.
Our trip plan was to go back to civilisation in Ingham and restock before moving a bit further down the coast to Big Crystal creek to meet up with Stu's big brother, Andi and his wife Gemma for a couple days camping.
We got to Ingham with our list of things to do including blog posts, banking (via the internet), quick Skype messages and of course, food, fuel and water ....  It was a Sunday and therefore all the major supermarkets in town were closed.  The independent was our saving grace, but pricy and with small stock levels made it a bit of a challenge to pull meals together for 6 for two days.  However Katie in her usual resourceful self managed this with cool and calm thinking.  Whilst Katie was shopping Dad took the boys for a well earned play time in the centre of town.  That way he could knock off the banking, blog and Skype things.  It wasn't long before we had to pick up Katie. 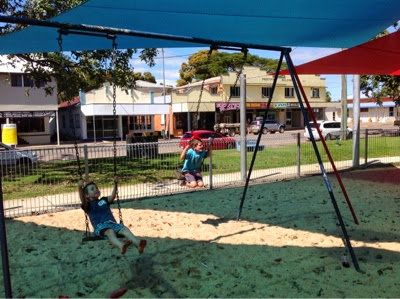 The park was so nice we returned there for an early lunch. Seems like the spot for travellers as quite a few wanted to have conversations about where we've been and going etc. Most were caravaners and heading north to where the tar ends.
It was just a short trip down the coast to Big Crystal a creek in Paluma National Park.  We made a quick stop at the Frosty Mango for sorbet ice cream.  The looks we got from the other patrons as we drove in, Dad thought something was hanging off the car.  Nope it was just the red colour of the camper indicating we had travelled a bit.  We each an had a different favour ice cream including strawberry, pineapple, coconut and mango.  Rich flavours meant we shared them around as they were quite stong and large!
Arriving at our campsite shortly after we had a bit if difficulty choosing a site, so many to choose from!  Once setup it was off to paradise waterhole just 100m down the road for a dip.
It was paradise, a lovely big swimming hole that as Andi put it had all the good points, a place to swim and rocks to bomb off!  The water was crystal clear (hence the name) and the water was deep, over 3 metres in some spots.  It had trout swimming around freely and with no fishing allowed it was no wonder.  Just a small throw net and good dinner would ensue !  So tempting ! 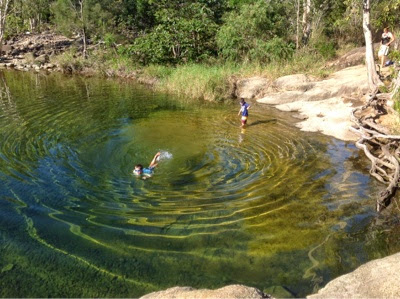 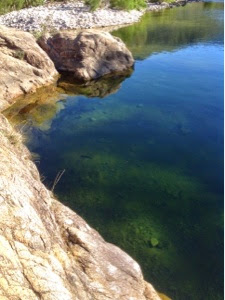 Did I mention that it wasn't luke warm water.  About 5 degrees from spanner water, so it was about 10 minutes of swimming before the sun lizards came out! The rocks were lovely and warm so it meant they were dry in no time at all. 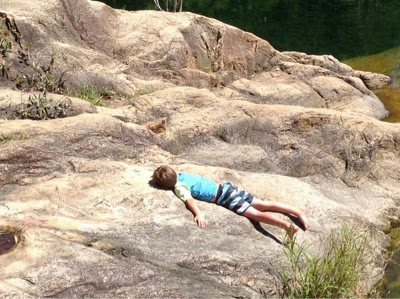 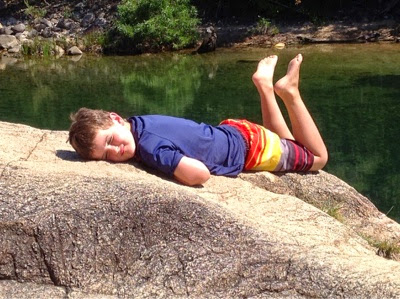 We returned to camp for fire wood collection and to wait for Andi and Gem's arrival from Townsville.  Dad collected a bit of firewood from around the district, there was meant to be stuff for sale outside the park from local stores but it was not evident.  At least the fire that evening was more successful than at Wallaman! Amazing what dry wood does!
Andi and Gem arrived on the dot of 6:30 to much excitement.  They had brought along the gifts that Big Stu had tried to get to Townsville before we left.  Big Stu: they arrived the day we left, the express post arrived after the normal post!  The boys opened their presents, Griff made the comment that he hoped they were shirts because Big Stu always gets us nice clothes to wear!  So yes they were impressed Big Stu!
We spent the rest of the evening having a BBQ dinner and a sit round the fire catching up.  It was great sharing some of our adventures with Andi and Gem.  Lovely weather with a light chill that the fire removed.
Posted by Stuart Ross at 18:56