Its moving day and the first for a while with the old crew of Mum and Dad.  Getting the old routine back didn't take long. Although there was a hiccup with pack up due to a pole not being dropped enough meant an undo and repackage was necessary.  On top of this, it was our first pack up in the rain, we knew it would come and Cairns was one of the more likely spots.  Apart from that all was good, our departure was around 9:30.  We were packed and ready to go till we remembered we had left the egg and bacon pies that Katie had cooked in camp kitchen the night before, so back we snuck into the park to collect them.
We were heading for Undara Lava tubes today and had booked ourselves on a 3:30 tour.  It was estimated that it would take at least 3 1/2 hours to get there so we had a schedule we needed to keep. A quick stop for fuel and to get Ernie's press stud repairs and we were off.  Note to self: buy press stud tool for $10 off eBay, $25 minimum service at repair shop for such a small thing!
Off up the hill we went, actually it's was some serious hills called the Gillies ranges.  From sea level to 1000 metres in an hour and a bit.  The road pass was about 19 kms.  Griff and Katie who just love windy roads were a little over the last 10 kms.  Not much of a view because of the rain, cloud and fog.  About half way up we were surrounded by cloud.  The views would have been spectacular. 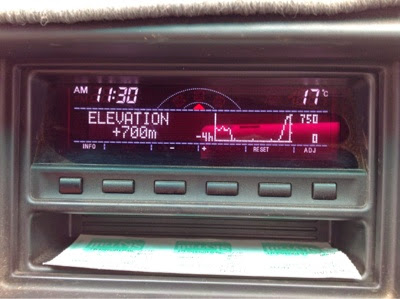 A early shot of the climb from Charlie's perspective.  The temperature was dropping in the opposite direction.  At one stage got down to 15! No one dared open a window! 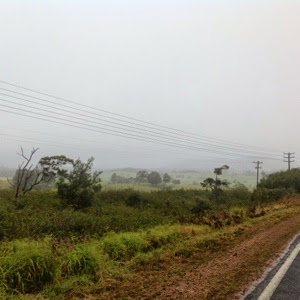 The weather was a little inclement.
Went through Ravenhoe, queensland tallest town.  Lunch at mount Garnet, quite little place that had digger scoops on display.  Just the bucket but no text or plaques to say why. 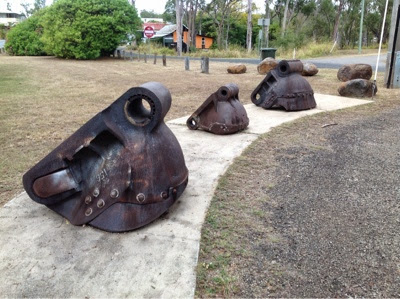 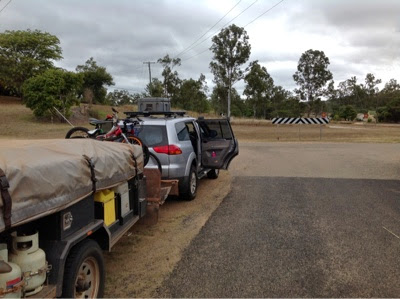 Egg and bacon pie was munched with great gusto. 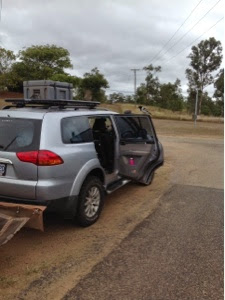 Even the locals thought egg and bacon pie would be good tucker.
The landscape flattened out as we made our way south west towards Undara.  You can't see the tubes without a tour, the reasons stated were safety but I am sure that there is a financial incentives for the private owners who do the tours on the behalf of national parks.
We pulled into the park at around 2:30 so had time to find the campsite, unpack things necessary for the 2 1/2 tour and wander back to the tour meeting place at the office. 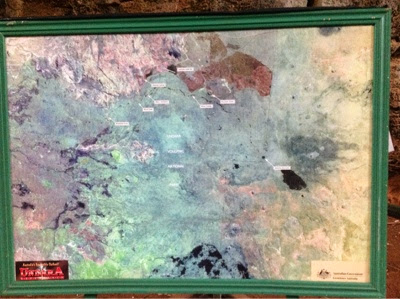 A satellite image used to describe the location of the tubes, the dark bits are thick rain forest or lakes.   So there are a few tubs around, the only found a second set when they built the road in, they had no idea a second tube existed.  The tubes we concentrated on were from the Undara volcano, and formed some 190,000 years ago.  The numbers are impressive for the volume of lava, it could fill Sydney harbour 3 times, flowed at a rate of 1000 cubic metres a second and the list goes.  They are about 32 kms long in total but there are roof collapses and they are now made up of 69 sections.  What I can say is they are big.  The photos don't do it justice. 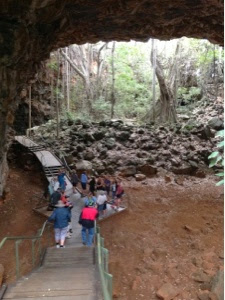 The archway which is about 12 metres high. 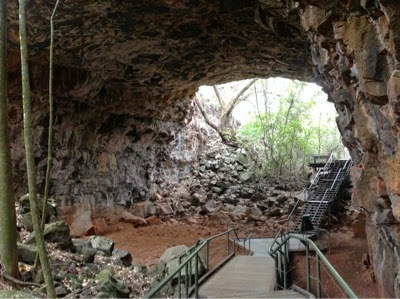 The archway from the other side 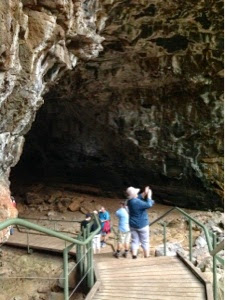 Back from the tour, and had a quick chat to a couple that knew some of the people connected with one of the program's Katie managed on behalf of DAFF before we went to go and unpack Ernie, only to find that we had to cut off another lock,  they fill,with dirt and water and finally cease.  We had protected them for most of the trip by taping them up, we thought that with fewer dirt roads this wasn't necessary, turns out we were wrong!  Out with the hacksaw, it was a high tensile lock so it took a bit of time.  Dad was nackered after he got through it, only to find that he needed to do the other side of the lock as well! 20 minutes later, Dad was over it but the lock was removed.
Just a basic setup but it was dark whilst still cooking dinner.  Chicken satay eaten inside the tent as the wind made the temp a little chilly. 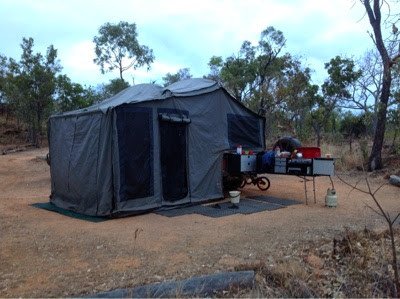