Left reasonably early at 9am even after a quick chat with other campers.  There were a few that left very early around 6 or so. They must have had a big day planned.
We were looking to do a bit of a walk up Mount Kalkani, a volcano that last erupted just some 20,000 years ago but has a perfect cone remaining.  We got there within 10 minutes of Undara.  Sensing the boys weren't super keen on the full 2.5 km walk we just walked to the rim, and around a bit then returned. 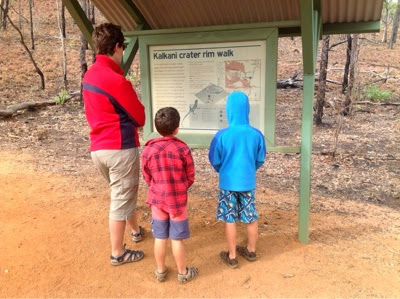 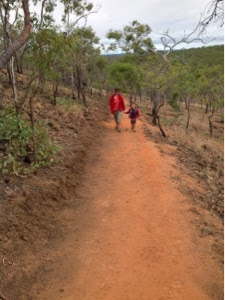 The plan was take a shorter road on dirt to go back to the coast as opposed to going south and then north again on tar.  Turns out it was less kilometres but it took just as long.  The road took us past lots of cattle stations, so cattle grids were the order of the day. 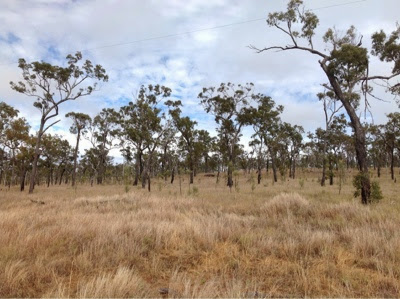 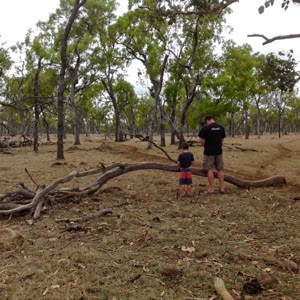 Dad and Andi sharing a moment 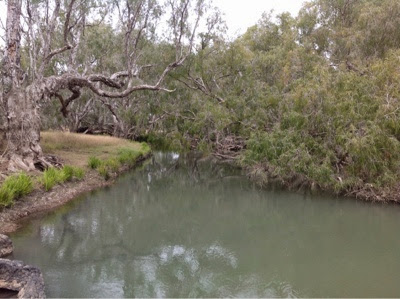 Crossed the Burdekin river again, last time it was about 100 metres wide. 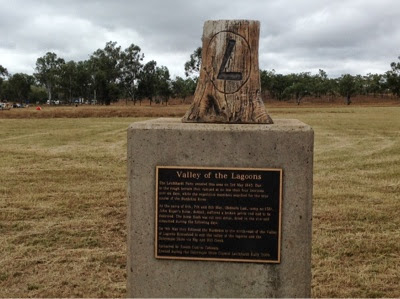 The road to some degree followed Leighharts track.  Just a bit further along here we came across 30-49 tents planning for the community cricket match.  Out in the middle of nowhere!
Another bit of excitement was coming across this little fella.  About 6 foot we estimated.  Uncle Chris would have been in my lap by now! 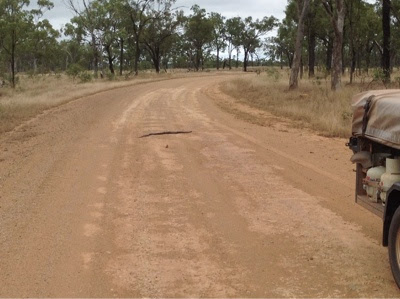 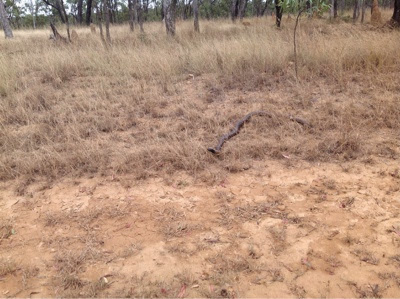 We reversed back a bit and he came back for another looksee.
As we got closer to the coast the rain increased.  We had to go over the mountains through Mt. Fox before we popped out on the coastal plain, we then turned north to head back up them for the campsite.  The roads were interesting, windy and narrow, and the rain it all the more exciting. It's called rainforest for a reason!
It was our first setup in the rain, not heavy rain but enough that it was best the boys hung in the car.  Octonauts on the iPad had them in the car while we got Ernie setup.  The wet weather added a new angle to cooking and eating.  The bugs loved our lights so we resorted to eating our Spaghetti Bolanaise inside Ernie.
Listening to the rain it was rather soothing and we were asleep by 10 ish... For the first time ever Katie was asleep first and by 8ish too...she could of just been really tired or it might of been the fact that Dad pretty much knocked her out with an annex pole while setting up!
Hopefully it clears up as two days in the rain will be interesting! 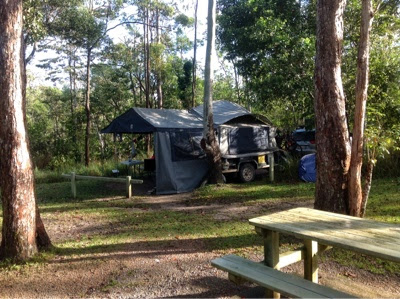 Our camp the next morning.  Check out the sun!
Posted by Stuart Ross at 18:22