The day started the same with our friends waking around 6:30 and zooming off in cars, seeking firewood and cracking things to get the morning fire going.  All of this to a chorus of "f","s" and "c" words spoken that the top of their lungs.  Increably inconsiderate, made my blood boil!  Seeming some simple as shutting up would have made things a whole lot better for everyone.  I will hop off my soap box now.
Other than that it was moving day so we got first breakfasts going around 7:00.  Trying to keep the boys a little quite while Gem and Andi slept in their tent was a challenge.  They too were having fun listening to the language for our friend down the road.
Around 8:30 we had bacon and eggs and in between did little bits of packing.  It was the first time we demonstrated the pack up for Andi and Gem.
The plan for the day was to drop into Townsville outskirts to restock fuel and food for the next couple days. Over the next coulple of days we will head west towards White Mountains National Park and then continue west towards Porcupine Gorge and then down to Winton.
We stocked up with supplies with no fuss and headed around and then out of Townsville towards Charters Towers. 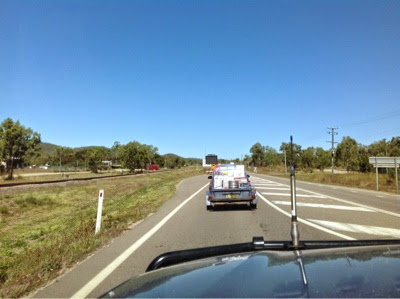 Followed the crown hotel alcohol order for a little while heading west. The little Hyundai i40 was so full it made Charlie look like he was on tippy toes.  Can't believe that they transport a hotel's liquor order by car and trailer! 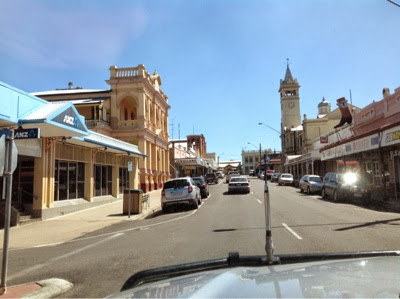 A very busy main street of Charters Towers with the town hall and information centre in the tower at the end.
We had lunch in Charters Towers, found a wonderful park for the boys to blow off some steam.  Spoke briefly to Uncle Chris who needed some technical ipad support.  Sounds like he has hit the ground sprinting at home, although he had mentioned the procurement of camp oven so hopefully the holiday memories will last a little longer. 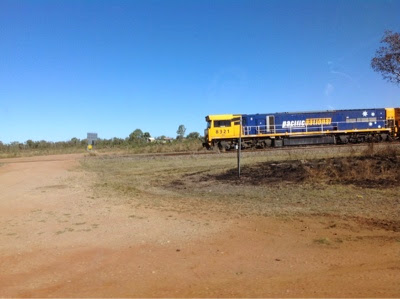 Driving out of Charters and along the road it followed the train line all the way.  Guessing it goes to Mt Isa.  The trains are a little long like the road trains. 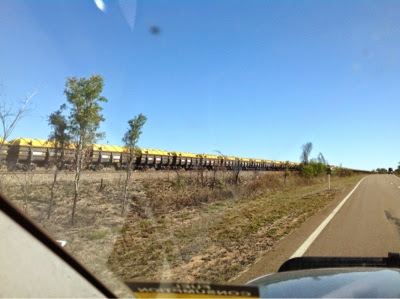 It went on for 100 or so carriages!
We continued to drive, it was an easy drive with the boys settling into a new audio book we have purchased.  It was Andy Griffith's Just Crazy and the boys were having a great laugh.
We really struggled to see any signage of the White Moutnians National Park.  The best we saw was a sign that said "White Mountians National Park 16km East". What the?  We stopped in a little town called Burra and asked the publican the best way in there.  The reply (with beer in hand) head back up the road to where the dunnie's are on the left hand side of the highway, it's about 20km back towards Charter Towers, oh and there is just nothing fu$)(ing there!"  It just filled us with confidence!  We made a decision to give the NP a miss given the silly non existent signage! Plus it was getting late and we needed a plan for night. The roadkill was mostly big roos, younger cattle and pigs, so nothing that you would want to toy with after dark if you can avoid it!
We decided to push through to Porcupine Gorge.  People have spoken about it and the signage seemed more like normal, i.e there is some.  It meant another hour or so in the car which pleased the boys none to much! 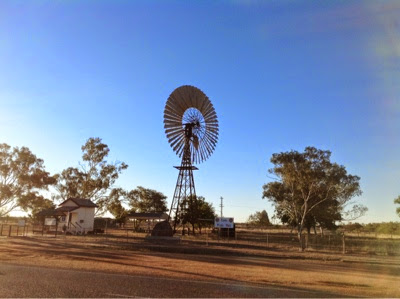 Stopped for a toilet break at Prairie.  It has a massive windmill.  Just for show though.  From here we tried to book the next campsite in Porcupine Gorge but a lovely "Error" screen ensured and we were out of luck.  We thought that we would risk it any way. 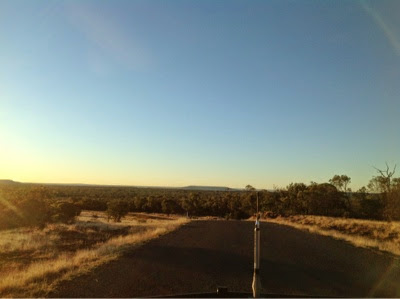 Driving into a setting sun, not ideal but pretty. 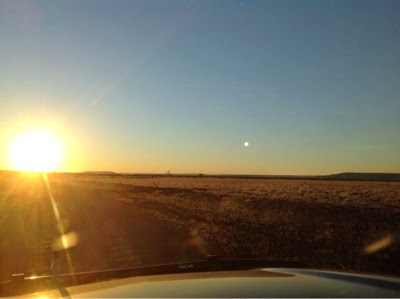 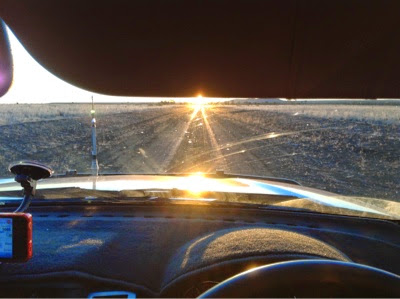 Once the sun got down low the view was somewhat restricted but surreal at the same time.  The colours, scale and form of the country is awe inspiring, so vast!
We rocked into the campsite just on dark.  Given the boys good behaviours they had some Octonauts time whilst Mum and Dad setup Ernie.  Just a basic setup, with sausages and bread on the menu, it wasn't long before we had dinner on the table inside Ernie.
Little kangaroo things joined us, not sure what they are, Bandicoot or Bittongs, not sure but they are cute and quite confident!  Andi wasn't a fan of them but we will see how things go this evening. After a total of 551km everyone soon crept into bed and asleep by 9:30 ish.
Posted by Stuart Ross at 15:00