After a night that had a bit of a chill the sun rose and warmed things up a bit.  Griff had a restless night, as when it is a bit chilly he bumbles something cronic and then tries to find the warm in a single blanket as opposed to keeping his sleeping bag on.  Mum then has a restless night putting additional clothes and resetting his bedding cause he says he is cold.  Dad's suggestion of putting him in the mummy shaped sleeping bag and tying the top might get a guernsey tonight!
The little kangaroos turned out to be rufous bettongs. Cute little guys that cleaned out the frying pan of its sausages juices overnight.  They are nocturnal so we didn't think to get pictures last night and they weren't anywhere to be seen this morning.  Oh well, google it and you'll see what they look like.
After breakfast we packed up and moved Ernie to the day use area.  We were planning to do the 2.4km walk to the bottom of the gorge and back.  We used Dad's camera for pictures so we'll have to get them off there but the gorge although not super deep was quite spectacular once you got down the bottom.  The Sandstone sides and base have been worn into all sorts of smooth shapes over the thousands of melenia.  Dad and the boys took a walk towards the pyramid and crossed the river several times, once again lovely and clear and well stocked with fish.  Oh for a rod!  We were back on the top of the gorge by 11:00 and had to decide where we wanted to stay for the night.  Staying at current spot wasn't an option as fires are prohibited. 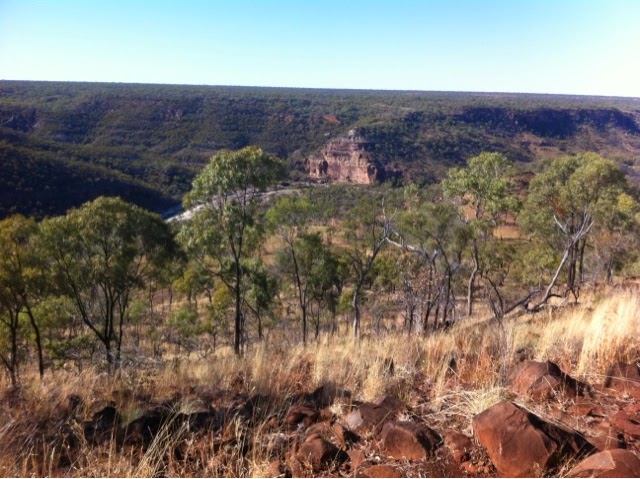 The pyramid for the top of the gorge 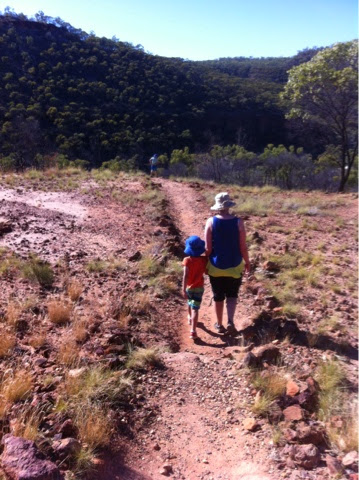 View of pyramid from the bottom 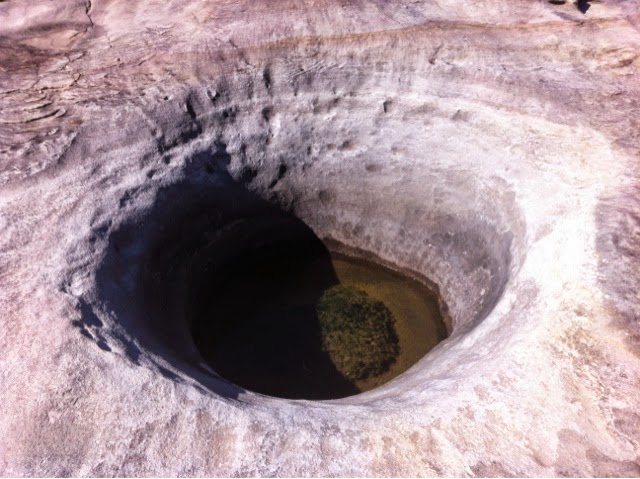 Wash pools in the sandstone that have been carved out by the water.  There was another one nearly 4 metres deep and twice as round.  Must be a lot of water out here at some stage!
We made the decision to continue towards Winton, a 214 km long stretch of road that has turns at the 130km mark.  The road wasn't particularly smooth, quite bumpy but more of the slower wider bumps than corrugations, something different anyway. It seemed that they have thousands of flood ways, in fact every dip in the road had a flood way sign! In the country known as channel country, it would be a sight to behold seeing the area during a wetter time. Not real exciting driving but the landscape kept you entertained.
It was our first tree free day, now low scrub or none at all, we now really in the Queenland outback still gripped in drought.  There is not much stock in the paddocks, only wildlife you see are very parched roadkill, or the animals feeding off them.  You get the odd the drought master cattle but most properties have now destocked because of the drought.  We counted 7 sheep in 130 km and they didn't look that healthy!
We stopped at the free camp at Corfield, the first corner we came to!  Setup camp closest to the BBQ area for the evening's fire. 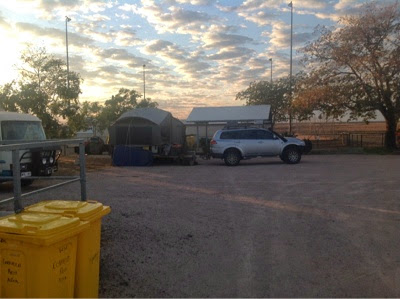 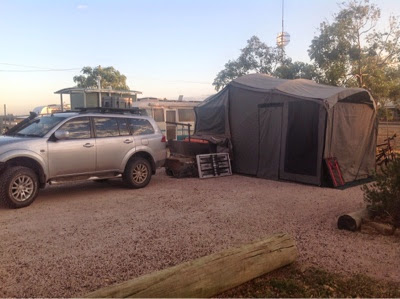 Next door to us was a tennis court, without the net and the boys had a great time running around playing line tag.  Dad even had a go and was tuckered out pretty quickly.  The boys imagination is fantastic and with three pieces of old playground furniture they were entertained for hours.  If that got a little too much there was always a bike ride for a change.
We toyed with the idea of getting a pub meal, only $10 and it came well recommended.  On the other hand Dad wanted to have a nice fire and burn some of this timber he has been dragging some 700 kms from Paluma!  We opted for the later and had sausage hotpot for dinner.
One of the 6 campers that pulled in for the night had been out at Opelton seeking his fortune looking for boulder opal.  The mention of the word opal and several others came out their vans, it was like an impromptu happy hour, sharing stories and gossip about what's been found and who is still going.  He was kind enough to share some small bits with the boys.
The sunsets in the desert are amazing, I am sure you have heard this before.  The purples and blue hues as the sun disappears was vivid and peaceful all at the same time. 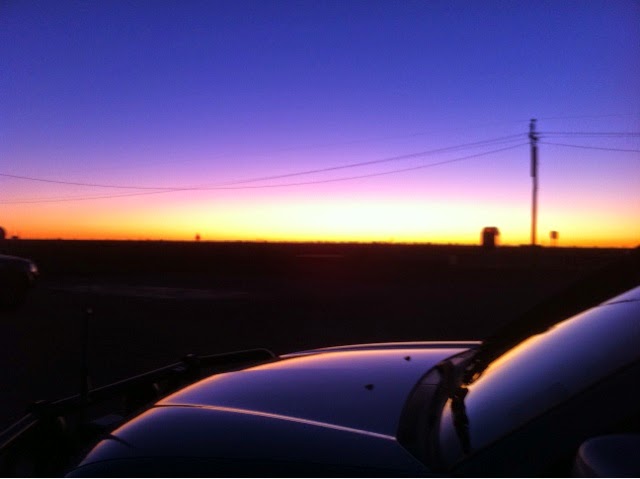 We spent the evening next to the fire (made in a BBQ) chatting with Bill and partner about their travels in the 1989 Viscount van.  After a few red wines it was time for bed, will sleep well tonight!
Posted by Stuart Ross at 15:00