It was moving day and so a few jobs needed to be done to get ready to head south a bit more.  The aim was to make our way to Tambo to pop into the famous" teddy bear shop.
We packed up by around 9am, the wind was fairly chilly and it made the pack up almost chilly, Dad didn't even raise a sweat in a jumper!  We made our way through Isisford rather than taking the  highway through Barcaldine.  The road was surprising good in places, they had put a bit of money about 20million into the roads around the district and it was evident where they had been, with still about 25 km still to go.  Having said that there were also sections where the tar bit was one lane and the dirt made up the rest.  You just got off and stopped for trucks, caravaners are expected to share a bit more but some were clearly scared to even touch the dirt!
We drove through Isisford, a surprising largish town for where it is situated and the population.  Had a pool, library and a school along with the usual pub and shops etc.  We pushed on through, the wind against us all the way.  It was killing our fuel economy, hitting about 16 or 17 litres per hundred.
We came to Blackall from the west, past a free camp on the river.  Nice place that we will remember for next time.  We wanted to give the boys a stretch and only found the local school as an option.  When asked if there were other options, the petrol station man was not very aware of what he had in his own town!  We had a quick bite to eat before seeing signs to a wool scouring plant.  It pricked our attention give the French's challenges with finding one of late.  We made our way there, realising that it meant we probably wouldn't make Tambo tonight.
The plant was originally built in 1906, and was the only operating steam driven scour in Australia.  The water is from a bore linked to the great artesian basin, coming out a perfect 57 degrees.  It closed down in 1978 due to a number of reasons, the wool market, maintenance and operating costs. It lay dormant for 20 years before local residents formed a group to bring it back to life, aiming really to capture a historical time as well as creating a tourist attraction for the town.
We got there just in time to back onto the 3pm tour (we have a habit of doing this) and our guide took us through the history and machinery sheds.
Everything was steam driven by boilers on site, the original engine and scour machinery are all operational but just at a slower than full production speed.  The boilers were powered by a constant stream of wood cutters using the Geehi tree from the district.  The 200,000 litres of water a day were used in the washing process and because the temperature from the ground it didn't need anymore treatment. 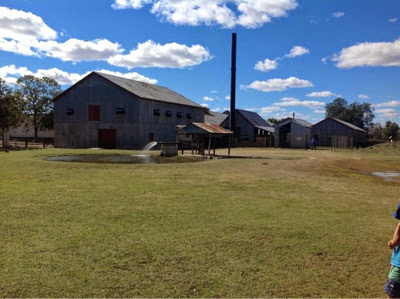 Scour with bore in foreground 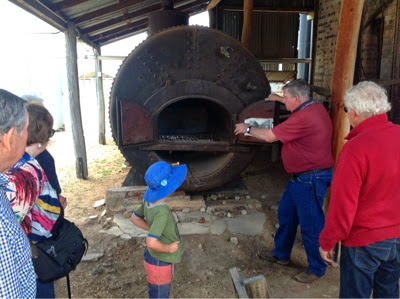 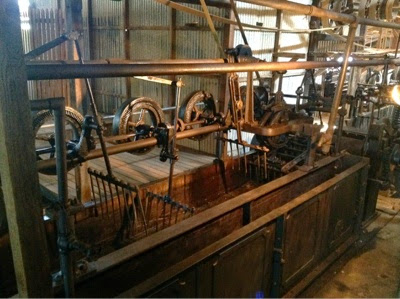 First of the scours 4 wash bays . 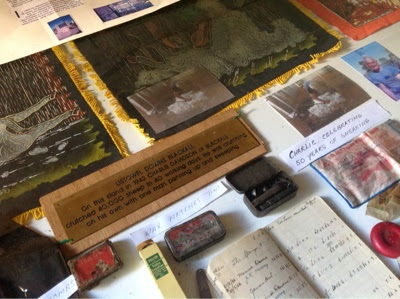 One of the famous shearers who crutches 1000 sheep a day for 40 days! Impressive effort.
The aim of the press was to export the wool in the most compressed form possible, the washing reduces the weight by 30 - 40% and then a series of presses and compression reduced it to have about 4 bales in the space of 1 normal pressed bale.  This was then taken by train to Brisbane and shipped over to England.
It was a fascinating but frustrating story, to have all this infrastructure available and not being use for actual production seemed like a waste.  However they explained the money it would take to make it viable in today's market as well as it's heritage status, means it will remain in it's current state for some time yet.
By the time we finished there it was too late to get all the way to Tambo, we figured we would head in that direction and see how far we get looking for free camps on the way.
About 40 kms south of Blackall we came to the Barcoo river, it looked fine with other campers already settling in for the night.  We setup and began the process of collecting firewood.  The air felt like it make get a little chilly tonight.  Plus Dad wanted to have another go at scones.
The boys were up and about on their bikes, enjoying the rough dirt and mud around!
The scones were slightly more successful, this time the first batch was left in a little long, rock cakes resulted!  The second batch was much better.  We had a few before we sat round the coals for a while and then retired for the evening. 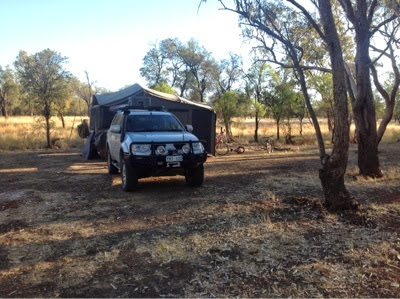 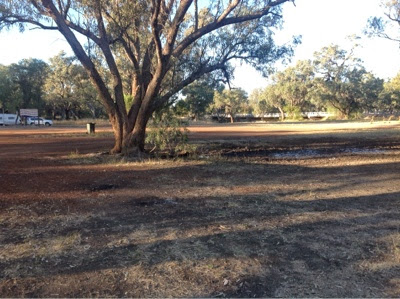 View from camp, road if the background
Posted by Stuart Ross at 21:24